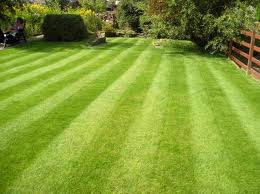 All around America people are beginning to take notice that one of the best ways to cure cancer is to prevent it. With that said, the organic lawn care movement is spreading across North America. With the growth of interest in this area, come ever expanding career opportunities. Future minded entrepreneurs are looking at organic lawns as a way to cater to the kinds of customers who want to have the clear conscience that comes with healthy lawn.

One of the benefits people have found with having a organic lawn is that it is healthier for their children and pets, and don’t forget wild life like birds, squirrels and other furry critters that roam throughout yards all over America.

In an article by Gwendolyn Bounds,she wrote “A recent survey from the National Gardening Association and Organic Gardening magazine found that, while only 5% of U.S. households now use all-organic methods in their yards, some 21% said they would definitely or probably do so in the future. "It says to me that it's going mainstream," says Bruce Butterfield, the NGA's research director. When a service area goes mainstream a proliferation of jobs will follow.

She goes on to say, “The issue of lawn chemicals is getting more visibility across the U.S. The little flags or warning signs posted around town by professional lawn services are required in some states; many tell people not to enter a chemically treated area within 24 hours of application. The same recommendation is on some off-the-shelf products.”

It seems the movement is growing rapidly. Bounds reports that “Nearly two dozen states, including New York and Wisconsin, now require public notification when pesticides are being applied by professionals, according to Beyond Pesticides, a Washington, D.C., advocacy group. At least 13 U.S. towns, including Lawrence, Kan. and Chatham, N.J., have pesticide-free parks, and 33 states and several hundred school districts have laws or policies designed to minimize kids' exposure to pesticides. Just last year, New York City passed legislation requiring the city to phase out acutely toxic pesticides on city-owned or leased property, and make commercial landscapers give neighbors notice before spraying certain pesticides.”

Whenever a corporations profits are concerned, the health effects of treating lawns with pesticides is going to be hotly debated. Bounds goes on to report that, “A growing body of research suggests that some commonly used synthetic pesticides may pose health risks, including cancer and kidney or liver damage, particularly to children and pets. One study published in a journal put out by the National Institute of Environmental Health Sciences, found that children exposed to herbicides and pesticides in the first year of life were significantly at higher risk of asthma than never-exposed children. The Environmental Protection Agency Web site says kids are at greater peril from pesticides because their internal organs and immune systems are still developing.”

Back in the early nineties, sensing the growing public concern, lawn fertilization companies started switching to enclosed green colored trucks with wildlife painted on the sides. This helped alleviate some of the visual concern from neighbors and customers, who viewed smelly, toxic, looking liquids sloshing about in the plastic see-through tanks. Any way you look at it, the organic lawn movement in this country is making bigger and bigger inroads into the 35 billion dollar lawn care industry. A career for people looking for an industry with a future just might be found here.

Tom Borg is president of Tom Borg Consulting, LLC. He is a business consultant, speaker, coach and author. Please see more of his blogs here and at business work force blog. For additional job listings visit:https://www.nexxt.com/

Become a member to take advantage of more features, like commenting and voting.